We have two collaborations going at Decorex Johannesburg 2012. “Decorex Designer collection with Raw Studios” was initiated by Decorex itself to bring some of the coolest designers and craftsmen’s work to the public’s attention, and Raw Studios was asked to ‘house’ them using our popular Ikonik™ woodlockers. Ikonik™ is our take on the traditional steel locker, produced exclusively from Finnish Birch Plywood (even the hinges) and as the name suggests, it has become a very popular must-have object to the public.

“Decorex Designer collection with Raw Studios” can be found in Hall 5, stand E77 and an absolute ‘must visit’ whatever you do this year at Decorex. The exhibition runs from 8-12 August 2012 and you stand the chance of winning a Raw Standup™ laptop stand if you swing by to enter. Standup™, the laptop stand you can hardly do without, is also on sale at the stand.

PIA – Pretoria Institute for Architects – was the first to adopt our (still under development) klik FS system as they don’t mind being guinea pigs for innovation. We kitted out their stand at the Green Building Expo in July and now again at Decorex Jhb. “It looks fantastic and works even better than expected” were the comments from PIA management and the public at the Green Building Expo. We are sure it will be a hit once again at Decorex. Visit the PIA at Stand G11 in Hall 2 as they exhibit the best that South African Architecture has to offer. Raw and PIA will continue to collaborate throughout the year on expos and the like.. 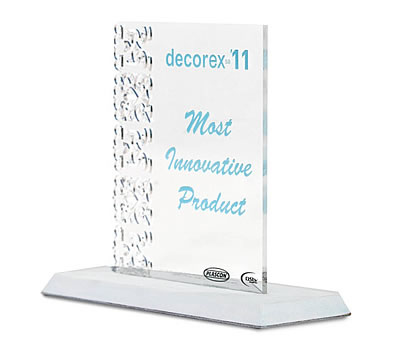 “Each of the products of RAW Studios’ stand can be considered for an innovation award. From the Toasti heater to the new line of office furniture- RAW Studios is the design force to watch. That’s why the judges decided to award RAW Studios’ whole portfolio of products with the award for the most innovative on show. The stand clearly mirrors the RAW design philosophy: well detailed, but nothing superfluous. Everything has a purpose.” Decorex Jury